This is not a complete game experience. A copy of the Imperial Assault Game Core Set is required to play. (See Below)

The Rebellion may prefer not to deal with criminals, but the Rebels still need the services of dedicated smugglers. You gain a single Alliance Smuggler in the Alliance Smugger Ally Pack forImperial Assault, alongside new missions and cards to enhance both campaigns and skirmishes. You can smuggle supplies past your opponents in a skirmish game to claim additional victory points or race to recover the cargo of a tramp freighter in a new campaign side mission. With the ability to slip past your opponents and hold his own in a fight, the Alliance Smuggler is a worthy addition to any strike team. 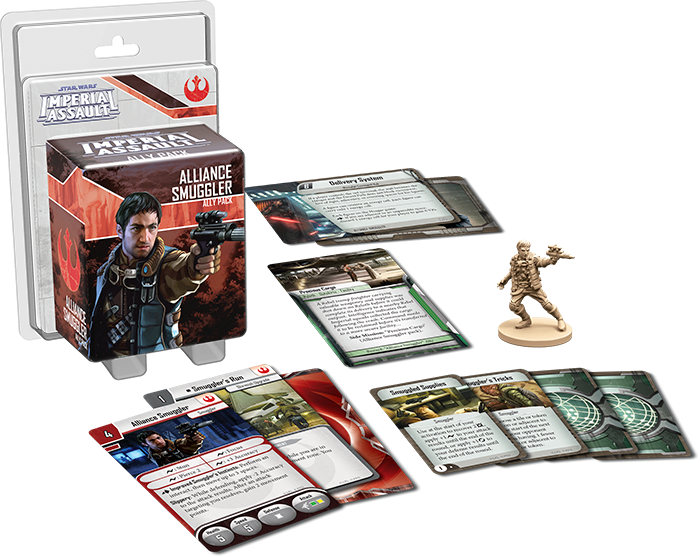 The Rebellion prefers to avoid dealing with criminals in most circumstances, but its dedicated smugglers are crucial to the continued survival of the Rebel Alliance. These smugglers carry weapons and medical supplies to beleaguered worlds, they can transport political leaders safely and quickly, and they can hold their own if pressed to fight. With the Alliance Smuggler Ally Pack, you gain a single Alliance Smuggler figure to support you in your campaigns and skirmishes.

In the skirmish game, the Alliance Smuggler is a powerful ally who can stun enemy figures or slip away from Stormtroopers and other enemies before they can pin you down with blaster fire. You might even embark on a smuggling run into your opponent’s deployment zone to gain some additional victory points! The new Smuggled Supplies Command card gives your Smuggler characters a boost when they need it most, and two new skirmish missions invite you to battle across the Mustafar Command Hub to make a critical datalink or deliver energy cells to your allies.

You may also call upon the Alliance Smugglers to join you in the campaign game with an entirely new side mission. In the Precious Cargo campaign side mission, you and your fellow heroes journey to Ryloth to recover the cargo of a tramp freighter shot down by Imperial forces. With the help of an Alliance Smuggler, you may regain the freighter’s cargo for the Rebellion and secure the services of the Alliance Smuggler for future missions. But the Empire is already on the trail of the cargo, and they’re certain to try to claim this cargo for themselves! Another great guide on how to play can be seen here by Tom Vasel: A great article on Imperial Assaut can be found here by Zach Bunn:
https://www.fantasyflightgames.com/en/news/2015/4/15/the-power-of-activations/
Want to paint your miniatutres – check out these great guides from Sorastros Painting:
Star Wars Imperial Assault Painting Guide Ep.1
Paints and brushes can be bought here:  https://www.tritex-games.co.uk/accessories-13/vallejo-paints-138/
Looking for alternative miniatutres to use with yur game check out our star wars miniatures here:
https://www.tritex-games.co.uk/star-wars-miniatures-330/
Review all the game and expansions or add your comments here: